In a bid to get me out and start enjoying life again, Bear and our neighbor S took me to Amanora Town Center for a bit of shopping and dinner at a restaurant there that we had yet to try.

S is a huge foodie, possibly more so that I am! And it’s usually due to S that we find some new place to eat or food to try.

Also, S is Bear’s best chaat eating buddy and they are forever trying to find the best chaat on this side of Pune.

So this time we went to Spaghetti Kitchen with a few other friends of ours. You can see their menu here.

The décor was lovely, inviting, rustic and bright. I loved the warm orange colors. It reminded me of a little garden Italian restaurant in California that I used to love going to.

So, we had a good beginning.

I also decided to “celebrate” Bear and my anniversary with a glass of wine. I rarely drink, maybe once or twice a year and even then I prefer something fruity or a Corona with lime.

This time I went for Sula Chenin Blanc. A light and fruity sweeter white wine, it went perfectly with the mood, our friends and the Sea Bass I ordered. I learned that Sula is a Nashik Maharashtra Winery opened in 1993 with accolades even from the Times of India.

First, they had a plethora of sauces on the table, including my all time favorite of Olive Oil and Balsamic Vinegar.

The waiter brought out a basket of warm and fresh bread and crunchy herby bread sticks. I ate almost all the warm bread myself, just happily dipping it into my Olive Oil and Balsamic Vinegar mix. YUM!

For the main course, I had the Pan Seared Atlantic Sea Bass. It was lovely and light and melted in my mouth. The black olive and mashed potato mix and herbed veggies that went with it were perfectly cooked and only needed a little salt. The sauce for the Sea Bass was a citrus olive butter with a slight mushroom flavor. Delicious!

Bear had the Tabouleh Salad and at first I was a little worried whether he would like it or not. They remembered to remove the tomatoes since my husband HATES them with a passion. Bear took a tentative bite and then dug in. He said it was probably the best “salad” he had ever eaten. I tried it and found it to be a light and refreshing salad with a big punch on taste.

Our friends had the Chicken Lasagna which I tried and found even better than I would have thought. I am not a big fan of Lasagna because I do not like ricotta cheese or the heavy pasta that usually used to make it. However they went very light on the ricotta cheese and the pasta layer was a thin spinach sheet that was perfectly balanced with the sauce and chicken. Again…another winner dish!

S got a small salad and a thin crust vegetarian pizza. I didn’t try this as I was already full, but the general consensus was that while it was “good” it wasn’t anything to write home about.

The service was impeccable, on time and friendly. Although their card servers were down, there was an ATM right outside so that worked out. The other reviews I’ve read seemed to have this as a re-occurring problem for Spaghetti Kitchen Amanora.

I can definitely say that this is a place we’ll go back to!

Check it out the next time you’re in the area and in the mood for some terrific Italian!

When I first moved to Pune, my biggest lament was not being able to find fresh (and safe) salad fixings like I would find back home.

For two years I craved a salad with Iceberg lettuce or Romaine. But the only leafy greens I could find were Spinach and while I like spinach IN my salad, I do NOT like an all spinach salad.

Then, one day while shopping at Dorabjee’s (can I just say how awesome this store is and how many times it’s saved my sanity???), I came across some fresh leafy greens that were not spinach. Next to those were red radishes and celery.

All with the label “Green Tokri Farms”.

I did some research and found that Green Tokri Farms is an organic farm nestled in the foothills of the Sahayadris Mountains on the outskirts of Pune.

Add to that their wide range of homemade salad dressings and marinades and I was in heaven!

But the best part?

That’s right; they will deliver straight to your door just like your local Kirana. They have specific delivery timing for each area of Pune, but you can bet that they deliver to your area at least once and probably twice a week.

My new favorite from them is the Oriental Dressing which is perfect either on your salad or as a dip for Spring Rolls. 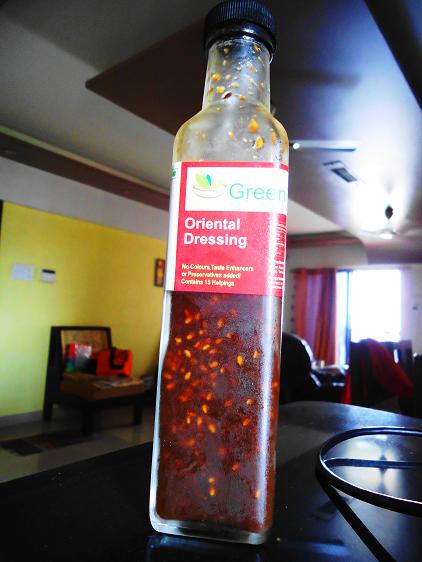 So check out Green Tokri and see if they can’t satisfy the salad eater in you!

PS: And thanks to my good friend and fellow Pardesi (the other half of a Desi relationship) friend of mine EK!

You know, when you’re sick, all you want to do is eat the foods you find comforting. For me it’s Campbell’s Chicken Noodle soup, Saltine crackers, Jello (red…uhm…flavor?) and Sprite.

Sprite can be found here and I use Marie biscuits to substitute for the Saltine but the soup is hard to come by.

However! Bear has found an excellent substitute which, in my honest opinion, is 100% better than any Campbell’s CNS I ever remember eating!

Yep! Maggie Soups are awesome! Way better than even Knorr which you can find here in India!

My favorite is Maggie Creamy Chicken. It’s delicious and warm and very comforting. Also good on a not so happy stomach.

So give Maggie a try! It’s not just masala noodles anymore! 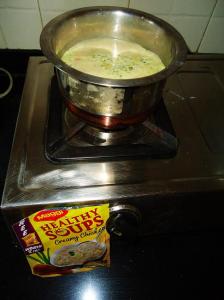 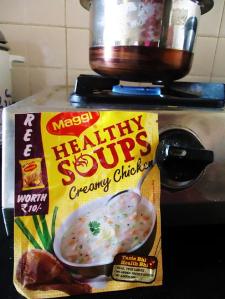 This is simply a way to dress up regular Idli. If you’re anything like me, you will NOT like the plain Idli each time  you serve it!

I keep it simple and use as much box mixes as I can.

Here is what you will need to start off.

Here is a link for a whole cooker set, it’s for Idli’s small dosa’s and dhokla. Niiiiiice:

Anyway, the Idli cooking tray is the one with the little round sections in the plate. But if you have something you can steam with and it’s large enough to hold your new Idli tray’s (which can have multiple purposes) then no reason to get anything else new.

Also, find your local Indian Grocery. Almost every large city (and even small city’s like my home town) has them.

Once there, buy some spices you will need. The basic spices for ANY Indian dish are as follows…

So, let’s begin shall we?

Refrigerate and use as required.

Ingredients
1 Lg Potato finely chopped
1 Md Onion finely chopped
Crushed Peanuts (to your liking…but I use about half a cup)
1-2 Thai / Green chilies chopped (depends on how hot you like it)
1-2 tsp of Garlic (either chopped, minced or crushed – I prefer crushed)
2 tsp Mustard seeds
1 tsp Turmeric
1-2 tsp Chili Powder (depending on how spicy you like it)
½ tsp Fennel seeds
1 tsp Subji Masala Powder
½ tsp Jagary (unrefined cane sugar)
Salt (to taste)
½ to 1 cup of oil, depending on your needs.

In a small non-stick pan, heat the jagary (sugar) in some water and add the crushed peanuts.

Cook until either the water is gone or until you feel enough of the sweetness has been absorbed by the nuts. Depends on your tastes.

Drain the sugar water from the peanuts and set aside.

In a non-stick pan, heat the oil on medium.

Next add two teaspoons of mustard seeds and cook until they “pop”.

Next, add the fennel seeds and fry until they start to darken (usually about a minute or so).

Next add the garlic, potato and crushed peanuts.

Turn the heat down and cook until the potato is tender stirring occasionally.

This one’s easy….get a large mixing bowl and then follow the directions on the box!

TIP: The batter should have a very heavy and almost gritty consistency; however it should be “smooth”. I used a rice cooker for my Idli steaming, so it took about 15 minutes to cook.

Once the batter is prepared, rub oil into the baking cups of your Idli tray.

Then put a small amount of Idli batter into each “cup”.

Now spoon some of your Aloo Subji on top of the Idli batter. You can add as much or as little as you want, but keep in mind not to pile it too high or not to leave room for the Idli batter to go on the sides or over the top of the subji. 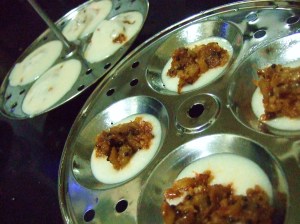 Once you’ve added your desired amount of subji onto the first small amount of Idli batter, and then pour some more Idli batter on the top of the subji and around the sides. The subji has to be covered otherwise when you fry the stuffed Idli; your stuffing is going to pop right out.

Once you’ve filled all your Idli trays, pop them into your steamer of choice and steam them for the proper amount of time.

Example: I used a rice cooker so mine took about 15 minutes to steam and I used about 500 ml of water in the bottom of my rice cooker.

TIP: My rice cooker is large and rather deep so the amount of water you use might be different from mine. You want to make sure that the water does NOT touch or bubble into your Idli otherwise it will be a mushy mess.

This is easy as well, get a large cook pot and then follow the directions on the box!

I added small diced potato, long cut red onion and a few green peas to mine. However, you can add any favorite veggie as long as it’s cut into smaller pieces.

You’ll be dipping your Idli into the sambar so whatever veggies are in there have to be small enough to pick up on your spoon that already has a piece of Idli.

TIP: I added a little extra water to my mix as I found that the sauce got too thick once I started to heat it up. I prefer a thinner sambar so I added a little more water, some more salt and a tsp of the red chili powder to make up for the water I added.

Once your Idli is done steaming, you can now start frying!

Get a round bottomed pan if you can, but I know sometimes that a little hard to do in the US. So, whatever you use for frying chicken or dumplings or donuts, use that.

Use enough oil so that the Idli’s do not touch the bottom but not so much that you go into oil shock.

Now fry the Idli’s until they are golden brown.

Once done, you can sprinkle some Idli powder on top or a little of your subji masala powder.

Serve them hot with your hot sambar and a side of your chilled homemade coconut chutney! YUMMY!

Your two cents worth!