I see an empty place at this table. I see a crutch without an owner, carefully preserved.

It hurts my heart.

On the night of December 19th, 2012…we arrived back home in Virginia. On the 25th of December 2012, my Daddy had sat in that chair, ready for Christmas. Now, here we are one year later. And that chair is empty. I suffered three losses this year. All of them major. Two are private and I will only share them with family at this point. But one…one I will share with you all.

This year was a year of many things, all jam packed into one fast paced year.

I took him for his first hair cut in months, that’s his (our) Redskins jacket hanging on the coat rack by the door. 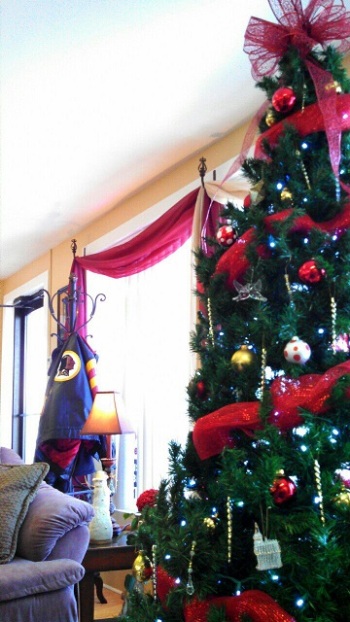 He taught Bear how to use the Snow Blower…from the comfort of his recliner inside the house. Bear would have to run inside to asks questions.

Dad would say “You’re doing a great job, buddy!!” and mean it.

We took my Dad to see the Nationals, the Baseball Team for Washington DC and the surrounding areas.

President Washington wins the base race!

He would spend a couple times a week at my house, enjoying the scenery and being waited on hand and foot. 😉

We would go for drives, his favorite thing in the whole wide world to do.

We would go grocery shopping together, and take a moment to stop and enjoy a particularly gorgeous VA sunset. 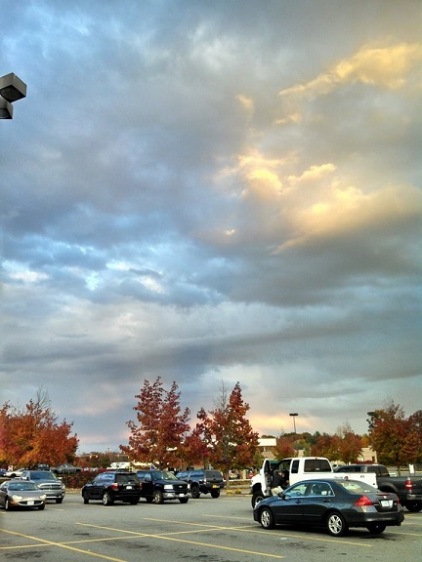 He would laugh at me when I asked for change to ride the horsey outside the Grocery Store.

Sometimes, he would be too weak to go inside the store. So I would leave him in the car with the windows down and tell him “Now, be a good boy! Don’t bark at people!” and he would make mad barking noises as I walked away.

And then…it all stopped.

My Father, the greatest man I have ever had the privileged of knowing (outside of my loving husband), passed away on September 5th, 2013. The family was by his side as he passed. My Step-Mom held his right hand and I held his left. My husband by my side. My little brother and his wife sitting next to me, my Step-Sister-In-Law by my Step-Mom and my Aunt at the foot of my Daddy’s bed. My Brother-In-Law was five minutes late and to this day…his heart breaks with the loss of not being there to say goodbye.

My Daddy was put in the hospital at the end of June. Eight weeks later, he was finally well enough to be transferred to a rehabilitative therapy center. He was on dialysis. He had lost too much weight. He still had moments of delusions and hallucinations. The chances of him making a full recovery were slim, the chances of him going home ever again were even less.

My Daddy put up a huge fight. He stayed as long as he could. In a moment of clarity, he even declared that he needed more time.

But he had been sick and in pain a long time. It was time for him to rest.

I spoke at his funeral. As did my little brother and my Step-Brother. I’m going to share what I spoke with you all, I’m removing his name and replacing it with ‘Daddy’.

Once Upon a Time…

That’s how most of my Daddy’s stories began. From as far back as I can remember, to as recent as a month before he died.

I could stand here and tell you a great many things about the man who was my Father. Many of them you would know, some you may not. But to me, the most important thing about him was his heart. I feel it was most easily seen by the stories he would tell. Sometimes they were for fun, maybe they were to make a point, and other times they were to teach. But every single time, they showed his depth of his character and his great gift of love.

The one he told me the most often was one about me. I used to think it was just an amusing story. A remembrance. Now, looking back on his life and how many people he meant something to, I realize it was much more than that.

Here is that story…
Once Upon a Time there was a NOISE.
When “Gori Rajkumari” was just a little girl, with hair longer than her dress, she decided that she was mad enough at us to run away.
So she packed her little suitcase with her favorite pajamas and stuffed animal and walked out the front door.
But I ran out the back door, to some trees between our house and the neighbor’s house.
When “Gori Rajkumari” arrived, I said quite loudly “OOOOOOooooo”…and she slowed down.
Again, I said “OoooooOOooOO” and she stopped.
Once more, I said “OOOOoooOOOOO!” and she ran for home.
I beat her there and was waiting at the door when she said “I’ve decided to give you another chance.”
And I replied “That’s probably a good decision.”

You see, my father was wise enough to know that he couldn’t force people to change their minds but he might be able to influence them in different ways. No matter what, he was always proud that you had come to the decision on your own, by your own volition. I could have kept walking, straight to our neighbor’s house…and I believe he would have been just as proud of me for that as he was for me coming home.

His life. His purpose. His morals. They all touched so many of us, in our own unique ways.

Somewhere, at some point…he gave us more than a smile and a laugh. He shaved off a piece of his wisdom and shared it with us. To carry on.

“Daddy” loved many things in life, his family, his work, his sports, and his causes. But I think one of the most important legacies he gave to us, were the stories he told. These stories taught us something without us even realizing it.

These stories are what make my Daddy immortal.

So….Once Upon a Time, there was a man named “Daddy”…

There was also a poem that one of my Father’s good friends read at the service. It was one that had comforted my Step-Mom and when she had shared it with me and asked me if I thought it would be a good verse to use at his service and on his memorial cards, I wholeheartedly agreed. It speaks to me.

Gone From My Sight

I am standing upon the seashore. A ship, at my side,
spreads his white sails to the moving breeze and starts
for the blue ocean. he is an object of beauty and strength.
I stand and watch him until, at length, he hangs like a speck
of white cloud just where the sea and sky come to mingle with each other.

Then, someone at my side says, “There, he is gone.”

Gone from my sight. That is all. he is just as large in mast,
hull and spar as he was when he left my side.
And, he is just as able to bear his load of living freight to his destined port.
His diminished size is in me — not in him.

And, just at the moment when someone says, “There, he is gone,”
there are other eyes watching him coming, and other voices
ready to take up the glad shout, “here he comes!”

And that is dying…

For years, my one greatest fear has been what would happen to me when my Daddy died. I couldn’t even begin to comprehend it. He had always been my best friend and my first love. He was my moral compass, my sounding board, my biggest fan, and the character in which all other’s were measured.

I felt like a little lost child, left out in the rain.

How was I to possibly live in a world in which he didn’t exist?

But so far, I am existing. It’s a different life. It is not an easy one by any means. I’m anxious and on medication for panic attacks which I had never had before. Depression lurks around every corner…I stave it off with light and laughter. But I also fear that I am holding off the heart breaking task of mourning for my father. My Step-Mom says that I must be patient with myself, that everyone grieves differently. To let it come as it comes.

But I fear I am not doing it right.

My Doctor says that my anxiety is coming from pent up emotions.

So obviously, my grief is mashed up inside there, cramped and shoved down…

This year I was manic in my shopping. I adopted a senior and a child in need and spent the love and money on them that I would have bestowed on my Daddy.

I did not cry.

We all recollected stories about my Dad. The funny things he said and did. The Christmas Gifts we had surprised him with over the years. A saw, a coat, a pair of glow in the dark crab boxers.

We shared love with one another.

I hope next year is better. I hope I can come back and write more. Share life with you all. Inspire. Challenge. Grow.

Happy New Year my friends and loved ones.

Till we meet again….

Your two cents worth!